Doodling Hearts On My Trapper Keeper

I love my husband. He’s awesome and cracks me up every day. But right now, I have a new crush. He’s a 12-year-old boy named Adam Goldberg, and he’s fictional. Sort of.

The real Adam F Goldberg was 12 years old in 1980-something, and was the dork who always carried around a VHS recorder, capturing the shenanigans and hijinks of his suburban ‘80s family. Now he’s the almost-40-year-old writer and executive producer of ABC’s new sitcom The Goldbergs, which recreates those same shenanigans and hijinks in 22-minute capsules. Episodes are built around footage from those vintage tapes, glimpses of which we are treated to during the closing credits.

The show is brilliant and funny in a Wonder Years-for-the-Gen X-crowd way, but it’s the actor playing Adam who has stolen my heart. Sean Giambrone plays the kid who is the aggregate of every boy I went to middle school with in the mid-1980s. He’s my neighbor down the street with the Midwest accent who thought his new Lightning Bolt t-shirt would finally make him popular. He’s my other neighbor whose prized possession was his Lego Millennium Falcon set. TV Adam Goldberg is the real Adam Goldberg reliving his childhood on film, and he is magnificent. He’s innocent and genuine, excited and hopeful, frustrated and confused. And he’s so darn cute. 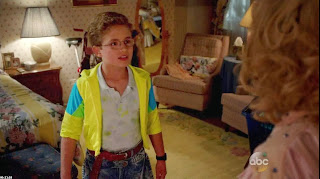 “Hey mom, take my picture, I want to remember this outfit forever!” Adam yells to his mom after his grandfather (“Pops”) buys him a new pair of back-to-school  Z.Cavaricci pants.

When Pops takes him to the movies to see Poltergeist, Adam is so scared of his clown doll at home that he fakes a tummy ache in order to sleep in his parents’ bed at night. 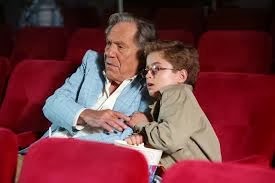 I just want to pinch his cheeks, give him a Fruit Roll-Up and juice box, and challenge him to a game of Missile Command.

To me he’s the nice boy who held the door open for me in the school library. He’s the boy who didn’t notice the three girls giggling at him on the bus because he was too busy drawing the Star Wars logo on his spiral notebook. And he’s the kid who didn’t understand why his dad was always yelling at him for everything because he was basically a good kid who sometimes got too excited. Come on, he’s 12.

I live for this show. I don’t know how this millennial actor has so expertly perfected a persona from an era long before his birth, but somebody owes him a lifetime supply of Whatchamacallits and a subscription to 3-2-1 Contact magazine for his achievement. He wears a home-made Tron costume like a true Gen-Xer, and seems to genuinely understand the zen of the Karate Kid.


TV Adam Goldberg, my 7th grade self is leaving an intricately-folded note in your locker, written in sparkly purple pen, asking if you like me. Check the 'yes' or 'no' box and meet me by the bus stop after school.
Luv, Me.
Posted by HeyRay at Monday, January 13, 2014