I grew up in one of those towns where teenagers constantly complained, “there’s nothing to do here.” Basically, any town in America, in any decade.

But this was Vero Beach, Florida, and in 1986, somebody finally heard our pleas of desperation and opened a 13-and-up nightclub, The Other Place.

It didn’t last long; less than a year if I remember correctly. Teenagers are fickle. 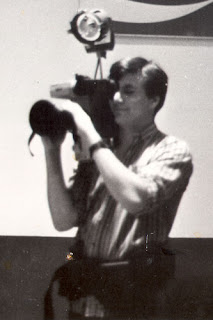 Around that same time, a guy named Craig was growing up there, and received a camcorder for Christmas. Much like Adam F. Goldberg of The Goldbergs fame, he filmed everything. In fact, footage he captured of a game-winning full-court basket shot at a junior high basketball game once made the national news. Craig soon became the official videographer of sports, homecoming parades, and graduations. He was employed by the local news station while still in high school.

What I did not know until today was that he also once lugged that hunk of A/V equipment to the aforementioned teen nightclub. What follows in the link below is 15 minutes of exquisite 1980s GenX teen life, set to the soundtrack of now-legends. The lighting is iffy, and it’s sometimes out of focus, but the content is pure gold.

As with most video from the ‘80s, the fashion is striking (collars UP!)…yet conservative. Were we going to church or out dancing? Boys in button-downs, girls in sweaters. Brights and pastels, skirts below knees. Tretorn sneakers and bright white pumps.

The girls are Jennifers and Stephanies and Kathys and Melissas. The boys are Robs and Bobs and Mikes and Christophers. At the end, our very own Footloose dancing feet moment.


All credit, honor, and thanks to Craig Jerome for not only being the geek who filmed this, but who was smart enough to keep it for 30 years and share it with us now.